Over the Christmas/New Year season we spent one of the days staying home instead of going out. Our maid was on holiday back in The Philippines and we were pretty much on our own with the boys. After a morning of scooter-ing and tricycle-ing downstairs, we came home to no lunch. As usual we tried to convince the boys they only need milk and don't need lunch, but even this time I was skeptical. Hubby put them in the bathtub and watched over them while I searched for food in the fridge. Found fish fillets bought by mil thankfully, and sesame seeds that I recently bought. Don't want to clean up any mess, so Airfryer it is. And of course, Google for recipe! With some modifications based on what I have on hand, here goes the fish which were quickly devoured by the boys, hubby included, and then a nap so that we can rest too! 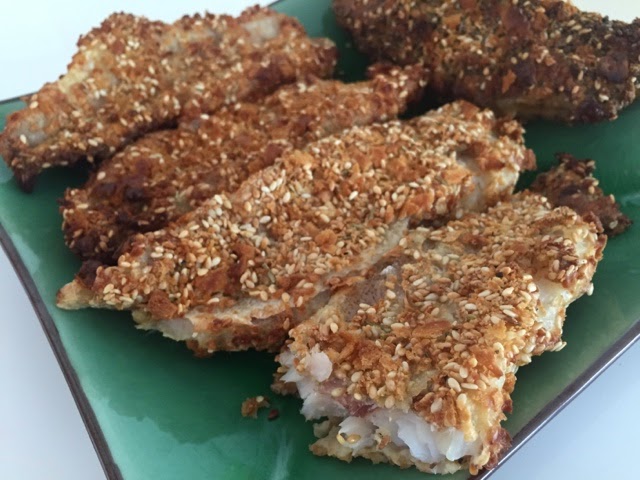 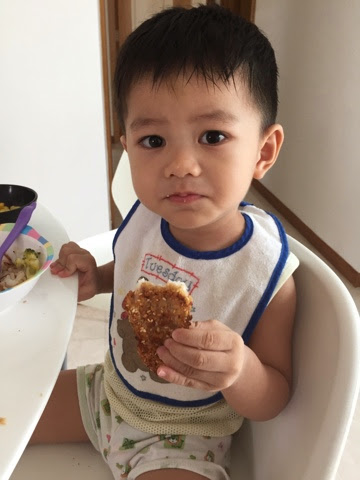 Original recipe from: http://thewhiteramekins.com/fish-chips-with-tartar-sauce-the-airfryer-way/
Ingredients:
- 5 frozen fish fillets, no need to defrost, how nice! (I can't recognise what I used, I think mil said its garoupa)
Note: it's also ok if it's not frozen. Just cut the cooking time by roughly 3 min.
- About 3 tablespoons of plain flour
- 1 egg, beaten
Coating:
- Handful of sesame seeds
- 5-6 soda biscuit crumbs (or any plain biscuits you have or breadcrumbs)
- Pinch of seasalt
- Pinch of pepper
- Pinch of rosemary herbs (optional)
- 3 tablespoons of oil
How:
Coating:
1) Fry the sesame seeds in the pan for 2 min, no oil needed. Stir constantly! They brown very quickly. Remove from pan.
2) Mix all coating ingredients together in a large plate. 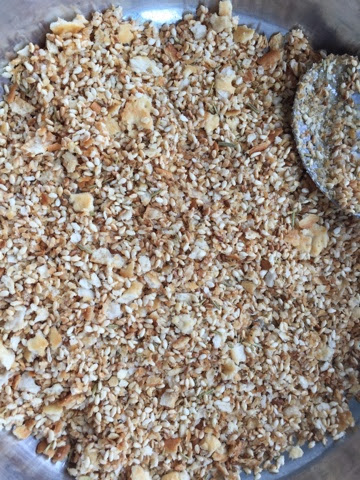 2) Line the Airfryer with aluminium foil and preheat Airfryer at 200 deg C.
3) Arrange your ingredients in the following order for efficiency! 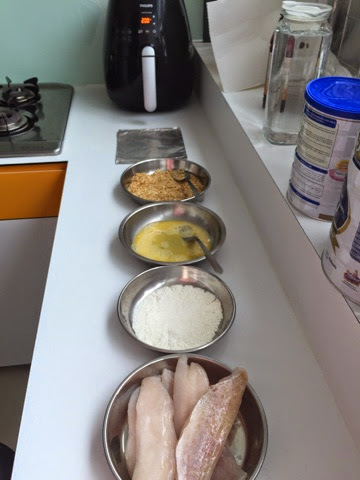 4) Dip the fish in the flour. Shake off excess flour.
5) Next dip it in the egg.
6) Then dip it in the coating mixture. You can be generous here.
7) Pop into Airfryer. If it's frozen fillet, cook for 10min, then flip the fish and add another 4min.
If it's not frozen, do 8min and 2 min.
8) And voila! 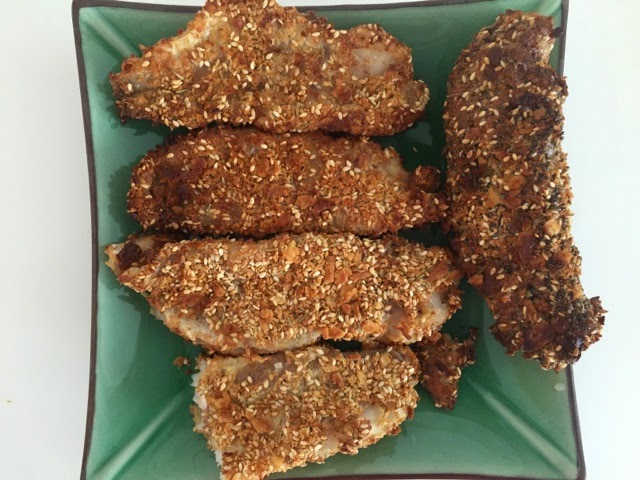 Mine had different colours because:
- First two pieces were not cooked long enough.
- Second two pieces didn't have enough sesame seeds so it was replaced with ritz  biscuits.
- Last piece had a lot of black chia seeds added by hubby and cooked too long.
I find that the sesame seeds were really fragrant. But it was not very crispy. Not sure why since the temperature was very high. If you get crispy fish do share!
Posted by Lulumummy at 16:43

Lulumummy
I am a typical mother of two young energetic boys trying to get the most out of family life, working life, friends and of course me time in the modern society of Singapore. I like to think that the type of life I want to lead is in my control. Most important thing in my life is family. Sometimes it is easy to lose track and take it for granted, so at times I like to reflect and remind myself. My guiding principle in life is my conscience. If it feels right, do it. If it doesn't feel right,whatever reasons there may be, don't do it! I am mostly down to earth and very ordinary and I do believe that you need to make yourself happy. I like to cook and steam cakes and muffins (because I don't have an oven) so I like to experiment at times. Depending on how you see it, the people who suffer or benefit is my family. Did I mention that I have an old dog too? I guess that sums up my multi-tasking life!